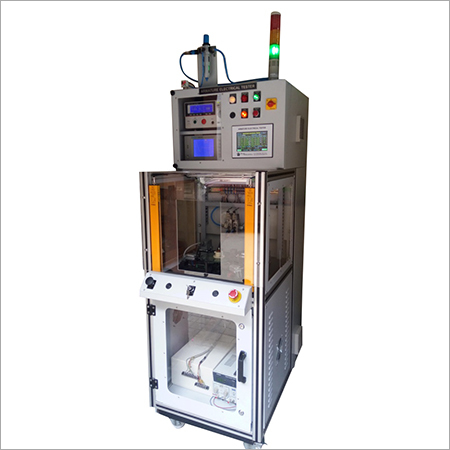 The tester is manufactured for testing the armature for 100% production in assembly line. This Armature Testing Machine has the capability to test the armature resistance between the commutator segments (Resistance test), insulation between copper & iron (Flash Test) and in-turn shorts between the windings (Layer Test).

The tester rig mainly consists of a control panel, mechanical table & fixture, PLC with MMI. Probe blocks are operated by pneumatic cylinders for resistance, high voltage and surge test. HV and surge tests are conducted in same probes and are designed accordingly. Probes are brought in and out based on the test being conducted and these contacts are automatically operated by pneumatic cylinders. The mechanical jig consists of a fixed fixture mounted on an aluminium extrusion table. A pneumatic cylinder requires 4 to 6 bar of clean and moisture free compressed air. The jig is electrically connected with control panel using metal connectors. The equipment is provided with an electric power of single-phase 230V, 15A capacity with standard earth.

The Resistance test is conducted to measure the Bar to Bar resistance and Weld (joint) resistance. The resistances are measured based on the classic Kelvin four-wire principle. In this test the armature is subjected to two currents namely main current and compensating current. The measuring coil has been electrically isolated from rest of the coils in armature with the help of main current and compensating current based by kirchoff’s law. Test current is applied to the armature coil between two adjacent segments and compensating current will be subjected to opposite adjacent segment. Hence, it compensates main current. The voltage drop across the bar to bar is called coil voltage and the drop across the bar and adjacent bar is called Joint voltage. The coil & joint voltages are measured and the resistances are calculated as per ohms law. Bar to bar resistance and Weld resistance is compensated with temperature.

This test is conducted for measurement of winding imbalances such as inter-turn shorts, loose winding design. Because of these factors, the inductance of the winding gets varied. This may leads to damage the insulation of the windings. The capacitor is charged to a desired DC voltage. The charged power is discharged through armature winding, which is an inductance. The capacitance and an inductance in the winding produce oscillation. This oscillation will die both amplitude and frequency then compared with master waveform. If the component oscillation coincidences with master waveform, then result will displays as pass else displays as fail.

This flash test is conducted to test the insulation between coil and iron of the armature. Here the test piece is subjected to high voltage. It is applied between the commutator and shaft of armature. A small leakage current will flow in terms of milli-ampere and it is measured to determine insulation resistance. The measured value is compared with the master value, If it coincidences with master value then result is displayed as pass else displayed as fail.

The salient features of our equipments. 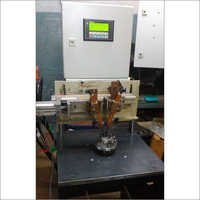 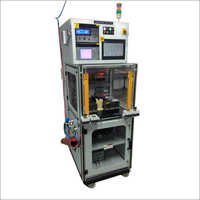 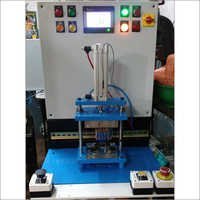 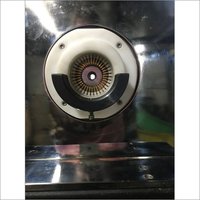